OPS continues with its plans to build public restrooms on the Island
Inn property at the corner of RT12 and Lighthouse Road. This project is
funded by a generous grant from the Occupancy Tax Board. Sketches below
show our plans for the appearance of the completed project. OPS plans to
have construction completed early this summer. 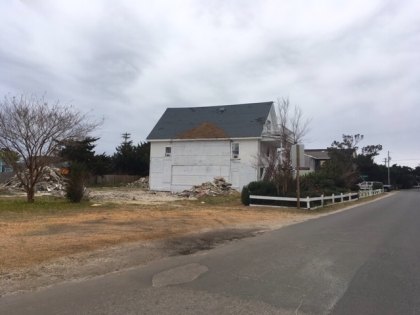 Photo courtesy of the Ocracoke Current

Work is continuing on the Odd Fellows Lodge and now bids are being requested for the next phase.

The Ocracoke Preservation Society is soliciting bids for a Project Manager for a public restroom project on the Island Inn property.

In December, the Occupancy Tax Board awarded grant money to OPS for the construction of a public restroom facility to be located on the OPS property at the corner of RT12 and Lighthouse Road (the Island Inn property).

Preliminary planning has been completed and, after its January Executive Committee meeting, OPS decided to request proposals for a Project Manager to carry the project to completion.

Information packets detailing the project and required tasks are available for pick up at the Post Office, the hardware store, and the museum. Deadline for submission of proposals is February 15, 2019.

OPS hopes to have the project operational by mid-summer.

Discussions are continuing regarding ongoing maintenance, cleaning, and operational details once the construction is completed.

**update** The project is happening! The side portions of the historic Odd Fellow Lodge are being taken off so that renovation of the center portion can take place. Exciting stuff! You can donate today and be part of this wonderful project.

Ocracoke Preservation Society Receives $15,000 Grant
The Odd Fellows Lodge Stabilization Project
FOR IMMEDIATE RELEASE
Ocracoke, North Carolina, October 10, 2018 – Ocracoke Preservation Society received a $15,000 grant on September 11, 2018. The grant was endowed by The Outer Banks Community Foundation for the purpose of the Stabilization of the Odd Fellow Lodge. The grant will be paid from the Diane and Nelson Henderson Endowment Fund, the Shirley and David Doran Memorial Fund, and the Community Fund.
The goal of the project is to provide the necessary stabilization of the Odd Fellow Lodge structure. Money will be allocated to The Island Inn Committee of Ocracoke Preservation Society Executive Board, which will pursue the stabilization effort. The project will be headed by The Island Inn Committee. The Island Inn Committee consists of Ken DeBarth, president of OPS as chairman; Otis Hurd, retired accountant, treasurer of OPS as treasurer; Andrea Powers, administrator of OPS as secretary; Bill Cole, community volunteer; Ed Norvell, attorney and island property owner with significant non-profit and land trust experience; Tom Pahl, local contractor and county commissioner; and Bill Rich, Hyde County businessman, land owner and recently retired Hyde County Manager as members.
Ocracoke Preservation Society along with the Island Inn Committee would like to thank the Outer Banks Community Foundation, the board of directors and executive director for awarding this grant is support of our project. “We are glad to become stewards of this historic property,” said Ken DeBarth, OPS President. “We have a lot of work to do. We need to find funds to do all the things we plan. We are looking for grants and other sources. This is a several year project but we are excited to take it on.”
Ocracoke Preservation Society Museum and Gift Shop is dedicated to encouraging, assisting, advising and participating in the identification, preservation, and restoration of significant structures, buildings, districts, objects of local interest, historic charm, distinctive character and natural endowments of Ocracoke Island. Some of the projects OPS has initiated and continues to support in addition to the Odd Fellows Lodge Project are: Save An Old House Fund, The Historic District, Save An Old Boat Fund, Land Trust Fund and Collections Management including artifacts, documents, photographs and ephemera, the preservation, archival and digitization manage of such. Ocracoke Preservation Society was formed in 1983 with the intent to preserve the unique island culture and history for the enjoyment and education of the community and its visitors.
Contact Information:
Ocracoke Preservation Society
Andrea Powers, Administrator
252-928-7375
admin@ocracokepreservation.org

The Ocracoke Preservation Society assumed ownership of the historic Island Inn property in early May. After several months of study and negotiations, OPS was able to purchase the deteriorating structure and its surrounding lots.

Over one year ago local businessman John Giagu conceived a complex plan for a village entity to acquire and preserve the property on the corner of Route 12 and Lighthouse Road. He consulted with local realtors and recruited Hyde County Commissioner Tom Pahl, Hyde County Manager Bill Rich, and part-time resident Ed Norvell (a Salisbury attorney specializing in non-profit arts and preservation) to develop a workable plan to save the property from commercial development. These men, working together, formed the “Island Inn Preservation Committee”.

The Island Inn Preservation Committee presented their plan to the Executive Committee of OPS in December and OPS began considering the opportunities and responsibilities in the plan.

At its March meeting the OPS Executive Committee agreed to purchase the Inn.

The Island Inn property includes the buildings and land on the east side of Lighthouse Road and the land across Lighthouse Road including the pool, the condo septic system, and parking area for the Island Inn Condos (but not including the condo building). At closing the pool, the condo septic system and parking areas were sold to the Condo Owners’ Association and the northern lot (between the pool and the brush line) was sold to Hyde County. The county will build a new EMS station on their lot.

The down payment for the purchase was funded by the sale of these two parcels. The remainder of the purchase is owner financed by the seller, Lighthouse Road Investors Group, LLC, with a balloon payment in 5 years.

Half of the monthly mortgage payments will be covered by a grant from the Occupancy Tax Board and half from the Tourism Development Authority tax board.

Much of the old hotel and restaurant areas of the Island Inn have fallen into disrepair and are beyond saving. These sections will be demolished.

The center section of the building is the old Odd Fellows Lodge, originally built in 1901. It will be restored to its historic condition and used as a visitors’ center and upstairs office space. The grounds around the restored lodge will be green space with some off road parking along Odd Fellow’s Lane.

OPS also plans to construct public restrooms on the lot, providing a sorely needed service for visitors to the island.

“We are glad to become stewards of this historic property,” said Ken DeBarth, OPS President. “We have a lot of work to do. We need to find funds to do all the things we plan. We are looking for grants and other sources. This is a several year project, and we are excited to take it on.”